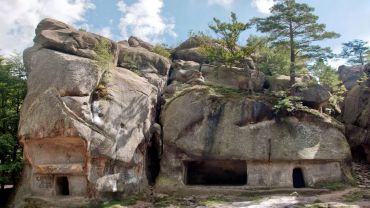 Those who like nature are well advices to go to the Dovbush Rocks located in the picturesque Carpathian Mountains. This rocky formation is named after the national hero Oleksa Dovbush. You will be impressed with unique forms of huge rocks, giant stones that resemble chimerical images of animals and different amazing creatures. Walk along paths and secret passages, through the dark gorges, and perhaps you will see the image of a lion or a heart of the brave Oleksa Dovbush. If you touch this stone heart with your hand and make a wish, be sure it will come true. Local people say you might recognise body parts of the highwayman Dovbush in every rock. So you can see a fist of Dovbush. Every rock bears its name and you’ll get to know them during your excursion. You’ll hear an interesting legend about Dead Lake, which is situated at an altitude of 900 meters. People say Dovbush has hidden his treasures exactly here. One of the most attractive places for tourists is a mysterious place called

“Chortova ushchelyna” meaning “Devil's Canyon”. According to legend, those who go through it will get rid of sins.

Don’t miss a chance to climb one of rocks, where you can expect picturesque views of the Carpathian Mountains! At the top of the rock there is a memorable place where tourists tie ribbons as a sign they have been there. It is considered to be one of the best places in Ukraine for climbing, that’s why you often can see alpinists climbing its peaks. The height of some rocks is over 80 meters. Some rocks bear quite interesting names, such as "Tulip", "Kiss of the Barabaka Dog", "Tavern by the Wayside" and others.

Local guides also offer tourists to take a keepsake photo with a falcon or you’ll have opportunity to ride a horse.

On the territory surrounded by caves and rocks, there is an ancient well. Today its depth is 4 feet, although in ancient times it was much deeper. It also shows that many years ago the mighty boulders served as a defence construction. Nearby you can visit a kolyba, traditional Ukrainian restaurant.

There you can get warm and taste delicious cuisine of Hutsul region. You can arrange a picnic or have a rest with a tent in the wood or by the mountain river. People say at night you might feel a special atmosphere, full of romance and heroism of adventures.

The Dovbush Rocks are located in the Carpathians, near the village Bubnyshche in Ivano-Frankivs’k region. You can get there by car or use public transport. You are advices to take a bus from the Bolekhiv town, which is located about 16 kilometres from the Dovbush Rocks. There you can buy beautiful presents and souvenirs made by hand by local craftsmen.

What is the best accessible to the The Cave Complex "Dovbush Rocks" from: