Museum of Wine and Winemaking 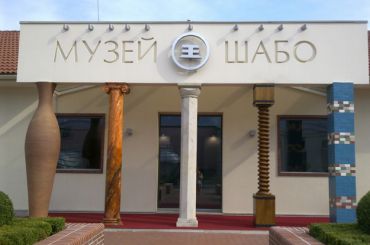 In southern Ukraine, near the city of Belgorod-Dniester in the Odessa region is a small village named Chabot. Here is an ancient plant with a centuries-old tradition of winemaking, as well as "Wine Cultural Center Shabo".

This center was established to improve the culture of consumption of noble wines and promote a healthy lifestyle among Ukrainians.

"Wine Cultural Center Shabo" consists of several parts. This Dionysius Fountain - the symbol of Shabo wine, which is presented in the form of a steel cylinder with carved figures. They depict the story of the creation of Chabot. The center includes several rooms - tasting "Crystal Hall" and cinema, as well as wine cellars - "Kheresko cellar" and "Royal cellar." At the "Wine Cultural Center Shabo" is open to visitors and Wine Wine Museum - a unique invention of the company, which is the only one in the whole country.

At the entrance to the halls of the Museum of the maze, you will see five columns personifying five stages of the development of winemaking in the territory of Belgorod-Dniester region. The first column is devoted to Georgia as a country in which the history of wine making began. She is depicted as a traditional Georgian vessel from which drinking wine. The second column represents the era of colonization of the southern shores of Ukraine, in particular land, which once formed a flourishing village. The third column is reminiscent of the domination of the Turks in this region and the construction of the great fortress of Akkerman. The fourth represents education and the emergence of town Chabot modern company with the arrival of the Swedes in Belgorod-Dniester region. Fifth column symbolizes the Soviet era, the development of art Shabo wine.

In the main hall of the Museum Chabot you will see a sculpture of the Greek god of wine Dionysus. They say that if you rub the statue, which God will bring you fun being and happiness. From the foyer are three corridors in the maze of historic, Georgian wine cellar and the Royal cellar. In the historical section, which is decorated in the style of a black box, clearly shows the history of wine and winemaking company Shabo. In Georgian hall, fully furnished national elements of everyday life, showing old technology of noble wine varieties Georgia. In the basement of the Royal meeting represented all vintages of Chabot. About this wine cellar are stories. He was named in honor of the royal Romanian King Carol III, who being here, leave my name on the wall of his signature. They say that the creator of Louis Chabot Tardan and great Russian writer Alexander Pushkin in 1812 and tasted these wines were polite conversation.

Visiting "Wine Cultural Center Shabo" will bring you many pleasant and unforgettable experience. Walk through the plant and cultural complex will center experienced guide.

To get to the village you can Chabot of Berezina, Ishmael and Odessa, from the bus that provides direct shuttles.

What is the best accessible to the Museum of Wine and Winemaking from: