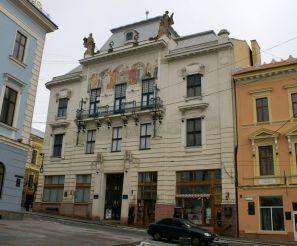 One of the best museums in Bukovina Chernivtsi today is the Art Museum. Visiting it, you can get acquainted with the art and folk art edge, discover new names and folk styles.

A nice plus to visiting the historic building will be perfectly preserved interiors from the 20th century., Which is a museum - a monument of national importance, made in the style of Viennese Secession.

Total collection of the museum is more than 12 thousand exhibits. Most of them are art Bukovina 17-20 centuries. Until a permanent exhibition in Chernivtsi Art Museum collection includes the following:

At first, the museum existed as a department regional museum and together they shared one room. Until 1988 the museum was opened as an independent unit. At first he was placed in the Non-functioning at the time Svyatoduhivskomu Cathedral . But soon he was sent to the community, and gradually the museum moved into its current building next to City Hall . The building itself is a remarkable work of art and mosaics on the facade of the top visible all around. Built in the room was for the years 1900-1901 Savings Bank.

The museum is located at Pl. Central, 10, in the heart of the city. By Chernivtsi easily accessible by train from Lviv, Kyiv, Odesa or own transport.

What is the best accessible to the The Regional Art Museum from: