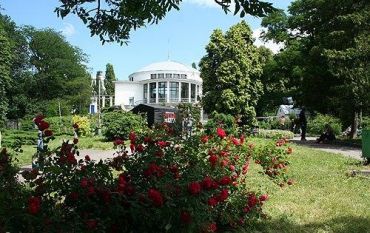 Fomin Botanical Garden is located in the historical center of Kiev for the red building University. Shevchenko . In one of the oldest botanical gardens in Ukraine, which occupies an area of ​​only 22 hectares, a huge number of rare plants and extraordinary beauty that makes the people of Kiev to come here again and again.

The territory of the garden is divided into two parts - the scientific and park. The park area is open to the public at any time. Especially popular it enjoys in the spring, during flowering magnolias, of which there are about 40 species. The scientific part is also available to the public, but only with a guide. There is a legend according to which the territory of what is now a botanical garden, belonged Lybed - sister of the founders of the city of Kiev . The valley was once an affluent of the same river, a tributary of the Dnieper, and was a garden Fomin.

Its present name Botanical Garden received after the death of its director, who held the post for about a quarter century. It was Alexander Vasilyevich Fomin managed to popularize botanical science. In addition, he has made Herculean efforts to save the plants during the cruel winter of 1919-1920. His merit is also the preservation of the majority of rare species during the German occupation of the city.

The current Fomin Botanical Garden - is not only a research institution, but also a real decoration of Kiev. And the multitude of students have the opportunity to take practice here in botany, researchers are heard by their discoveries, and visitors come here to enjoy the splendor of the plant kingdom.

What is the best accessible to the A.V. Fomin Botanical Garden from: