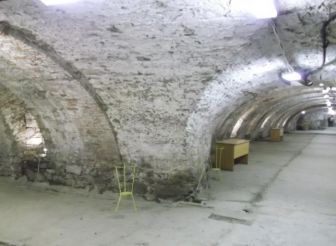 In the center of Uzhgorod , among many other historic buildings and monuments, occupies a special place brewery "Owl`s Nest", which has a few names that have emerged during the existence of "barn", "wine cellar", "Rakoczy cellars." Last connected with the name of Prince Ferenc Rákóczi, who allegedly laid these cellars for storage of barrels of beer. Brewery building was completed in 1781, as evidenced by the date on the facade. At that time there was a surge in the Carpathian region and wine trade.

The first time the room was used for storage of food and drinks, but after the elimination of factory equipment brewery turned into a hotel, and then - at the school, later - in a carpentry school. After connecting Transcarpathia to Czechoslovakia, in "the Owl`s nest" opened wine bar and the building became associated with strong drink. By the end of the 70s of the last century, the brewery dubbed an architectural monument of national importance. However, only in 2011 it was decided to restore the "Owl`s Nest" for the wine festival "Transcarpathian Beaujolais".

For tourists, travelers and connoisseurs of good wine - it`s an old building with a very interesting history. Its pretty easy to find it open tasting rooms. In the near future the opening of the museum. The locals are very proud of this attraction, so even if you get lost, any uzhgorodets happy to show how to find the "Owl`s Nest".

What is the best accessible to the Owl's Nest (Barn) from: