The architectural ensemble of Poltava - Round Square 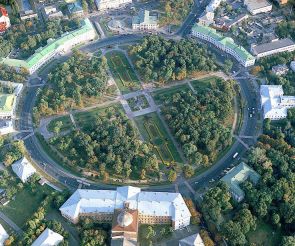 Round Square - is an architectural ensemble in the style of Russian (provincial) classicism.

Began to take shape Round Square Poltava in the early XIX century.

In March 1802 became the center of Poltava newly-Malorossiyskoy province. The authorities brought the issue - the definition of a new town center. Former historic center - Red Square (formerly Cathedral Square) - did not meet the new requirements, since its dimensions are not allowed to hold all the necessary administrative buildings Poltava province. Originally the project in 1802 was planned to place these buildings linearly along the streets of Little Peter's and Alexander (now Lenin Street and October on the segment from the Co-operative College to Cathedral of the Assumption). To implement this plan, Alexey Kurakins (the first governor-general of the province of Poltava) in Poltava was invited talented graduate of the Moscow school of architecture Michael Amvrosimov. Arriving in Poltava M. Amvrosimov refuses linear placement center, instead of offering to arrange administrative buildings in a circle on a new area, west of Red Square, the center of which stood a monument harmoniously Glory, as it is here that according to legend the locals I met Peter after winning over the Swedes at Poltava. Prior to this there was a vacant lot on which the fairground. The basis of future buildings M. Amvrosimovym model projects were put famous Petersburg architect Adrian Zakharov. In 1805 was approved master plan for the new center of Poltava - Circus.

Over the years 1805-1811. formed Poltava Round Square, at the expense of the famous philanthropist Seeds Kochubeya.

The first building on the new area becomes Poltava Malorossiysky post office, built in 1809. In 1810 built house Nobility and Provincial House official place. Over the 1809-1811 period were erected three gubernatorial House (civilized governor, lieutenant governor and governor-general). In 1811 - the county building official place. The final building in this unique architectural ensemble became Cadet Corps - 1840. The common features for all buildings are: most of them have three floors (lower ground floor); the other two floors have smooth walls, cut clear eaves; in the middle of the main facade decorated with a columned portico with pediment.

During the Great Patriotic War, the architectural complex was almost completely destroyed. After the war, Poltava architects recovery plans ensemble. Implement this plan during 1950 - 1960 years. then chief architect Poltava LS Vayngort - that his design won the competition and was adopted as the concept of rebirth. As a result, all the buildings have been restored architectural ensemble intact.

Today ensemble Round Square - is a unique holistic classic architectural ensemble, built in the same style.

Represents the area of a circular shape, the center of which is spread throughout the park and its dominant - Monument of Glory. In a ring around the park are eight buildings in the style of Russian classicism, between which all sides of the city lie the eight streets.

The architectural ensemble of the Round Square - one of the most beautiful and the favorite places of Poltava, and guests.

Squares reach very easily, any public transport to the center.

What is the best accessible to the The architectural ensemble of Poltava - Round Square from: