In the west you can travel by train along with car 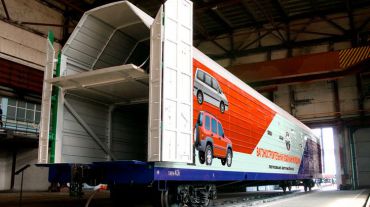 Machines and carrying special avtovahonamy. They pryyednuvatymut to train 113/114 Kharkiv - Mukachevo or 115/116 Kharkiv - Ivano-Frankivsk . Avtovahon will run in the city.

Avtovahony also be a part of the train Kharkov - Odessa. The first went to the south on July 4th at 16:13. From now train with spetsvahonom vyrushatyme Mondays and Wednesdays. At the main train station South Palmyra arriving at 9:18 the next morning.

From Odessa train with cars for cars will go Tuesdays and Thursdays. Vyrushatyme the road at 15:22. In Kharkov train arriving at 8:18 the next day.

To carry the car, other than passengers tickets need to issue car in the luggage station. This can be done every day from 8:00 to 17:00. The cost depends on the weight of the machine and the distance of the route.

Also, you may be wondering:

Date: 04 July 2016
Dekomunizovani monuments will be kept at the Museum of totalitarianism
For the dismantled monument of Soviet architecture in Kiev will be a museum of totalitarianism. It will be shown the brightest objects that are not only of historical interest, but also artistic value. This museum will attract many tourists. To complete the installation of its...

Date: 04 July 2016
Національний заповідник Софія Київська
вул. Володимирська 24, м. Київ 01001, Україна
St. Sophia Cathedral may delete from the list of UNESCO
The Kiev government with the support of the public indifferent finally stopped the illegal construction on the street Gonchar, near the St. Sophia Cathedral listed in 1990, the UNESCO World Heritage List. In the buffer zone Sophia accordance with the requirements of UNESCO must act...
Feedback